Which are best for a rear light - red LEDs or white LEDs?

A question I often get asked via the MatchlessClueless website is: which are best for a rear light, red LEDs or white LEDs? So let me explain...

LEDs are very different to conventional filament lamps and they produce light in a very different way. They generate very little heat which makes them far more efficient and hence much less power hungry than a standard bulb. The light from a filament is white because it is actually emitting light in all different colours, in just the same way that sunlight looks white until the wavelengths are split out into red, orange, yellow, green, blue and violet by water droplets to form a rainbow.

LEDs can be made to emit white light, but then can also be made to emit a particular colour of light (usually red, green or blue) by changing the material inside the chip. What you have to understand is that a red LED generates all of its light in the red part of the colour spectrum. This is very different to a red light bulb which generates white light, but then has all but the red wavelengths blocked out by a red colour filter covering the glass globe.

When you install a bulb or LED unit in a rear light unit, the red plastic of the lamp itself filters out all but teh red light. So if you use a standard filament bulb which generates white light, then (ignoring the number plate illumination for now), all of the yellow, green, blue and violet parts of the light output are just wasted. Only the red wavelengths make it through to be seen by the motorist driving along behind you. This is obviously quite wasteful and inefficient.

When we upgrade a rear lamp to use red LEDs, the first thing that we notice is that the rear lamp looks much more red (filament bulbs tend to give more of a pinky coloured red light in comparison). This bright red light is much more visible to other motorists. The red LED produces only red light and the red plastic lens of the lamp lets only red light out, hence nearly all of the light emitted by the red LEDs is visible from outside the lamp.

Filament bulbs actually give out a greater total amount of light than LEDs, but this goes off in all 360 degree directions, whereas the light from a LED is much more focussed and directed. So, although a red LED produces less total light than a white filament bulb, more of it makes it through the red plastic filter and less of it is wasted unable to escape the rear lamp.

I mentioned earlier about number plate illumination and most rear light units will have a clear window at the bottom to allow some of the white light to light up the rear number plate. This is fine for filament bulbs which are throwing out light in every direction, but not so great for LEDs which are usually pointing straight out to the rear of the bike for maximum visibility. Therefore you need a LED bulb that has some additional LEDs pointing downwards towards the number plate.

Although red LEDs are better than white ones for lighting up the stop and tail light functions, they aren't much use for lighting up a yellow rear number plate. For this, we really need white LEDs.

So which is best, red or white LEDs? Well hopefully it is clear than red LEDs are best for lighting up the red rear light unit, but we need white LEDs to provide number plate illumination. A rear light unit that only uses white LEDs will give a horrible pink brake light, and one that has only red LEDs will not give the required illumination to the registration plate. Hence motorbikes require a LED rear light that has both red and white LEDs for maximum performance.

Relating this to the MatchlessClueless range of custom LED light boards (see here http://matchlessclueless.com/store/products/modern-leds/), we use an array of red LEDs to provide the brake and tail light functions, and usually 3 downwards pointing white LEDs to light up the number plate. The best of both worlds!

Does that make sense?
James 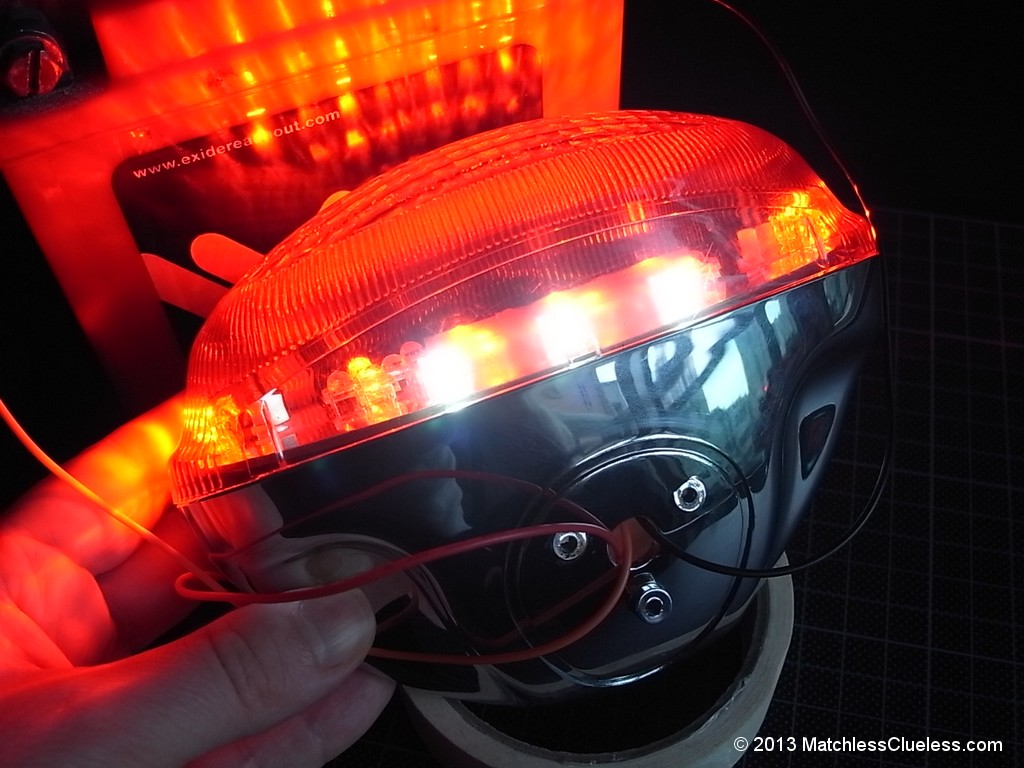 Of course it is white ah