The week leading up to the rally was spent in preparation. I got the new brush guards mounted on my Scrambler

Mr.Cob and Newt paid us a visit so Dave could use my shop to fit an enduro computer to his new Ural

I met Troy and Tracy at the event. Tracy rode her tan Ural "Warcat" Friday night and Saturday

Lee Riddle was my monkey for the Friday Night Ride. Not exactly the sweet young thing I was hoping for, but my standards come down when last call rolls around...

I didn't ride Saturday but Andy, Clementine and I rode over to watch the finishers roll in and visit with friends.

Scott borrowed a Harley to do the slow race. Note protective gear ATGATT!

Mr.Cob let me ride his 2014 Ural. I picked up Tracy as a passenger (she shot this photo)

We flew it around the fairgrounds for a couple of laps to get it warmed up, then headed for the hills. I did a thirty mile loop over Gihouley Mountain, down Highway 35 up Pinemont, across Booth Hill and back down the highway to Odell. This provided everything from steep loose dirt to smooth highway speed riding. The Ural acquitted itself well other than an annoying lack of throttle response off idle. This improved somewhat when the machine was hot, but it never went away.

It pulled well once you got it into the powerband but was gutless and had very slow throttle response off idle making powering up through the corners difficult. The fuel injection probably needs some more thought (seems like every manufacturer goes through this with the first FI models). It would also be nice if they tucked the plastic parts and connectors for the FI out of sight where they would be protected and look less like a shade tree project. I expect we will see that happening on upcoming models.

The handling is good, the suspension seemed well set up and the brakes are very good, stopping and slowing straight and true and very quickly. The new steering damper is cleverly mounted and seems to work well without imposing itself.

The rear calipers are off one of those three wheeled reverse trikes and incorporate a parking brake. And the only SAE bolts on the machine (I hate it when they mix up fasteners-that is a recipe for rounding off bolts and situational Tourette's)

But I don't have to wrench on this bike, so who cares? It was a fun outing and overall a very nice and much improved machine. Thanks to Mr.Cob for letting me take his new toy out! We pulled into the fairgrounds bright and early Sunday morning, parking in line behind my brother Andy's rig

where we picked up our score cards and roll charts

we had barely gotten the roll charts installed when the horn sounded for the rider's meeting. We all headed back inside and Tawm gave us a brief description of the course and some cautions about behaving ourselves out there

The staff was sporting spiffy orange t-shirts for the event After repeating after Tawm "This is not a race." we headed back to the bikes for the start Before leaving we each had to spank the monkey

We ran up the river to Mosier and our first reset

Looking north across the Columbia River we could see our destination: the hills and canyons behind Lyle, Washington.

We rode through the Rowena Loops, a justly famous stretch of road, and then east to The Dalles

We crossed the Columbia into Washington at The Dalles Tawm routed us through Schreiner Farms, a private zoo in the hills just off SR 14 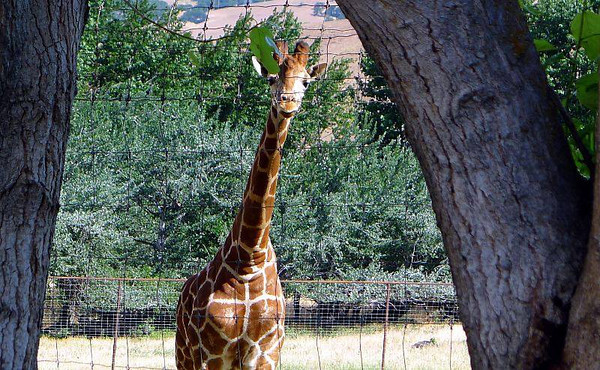 From the zoo we went east up Dalles Mountain Road Miles of washboard road fractured a fender mount. I stopped and cobbled up a repair

We stopped in Klickitat for the lunch break of hotdogs we wound our way down to the Columbia. I stopped to collect some trash for rally points before we turned west to pick up Courtney Road

The dirt roads destroyed my makeshift repairs, so we stopped and duct taped my sidecar fender in place. 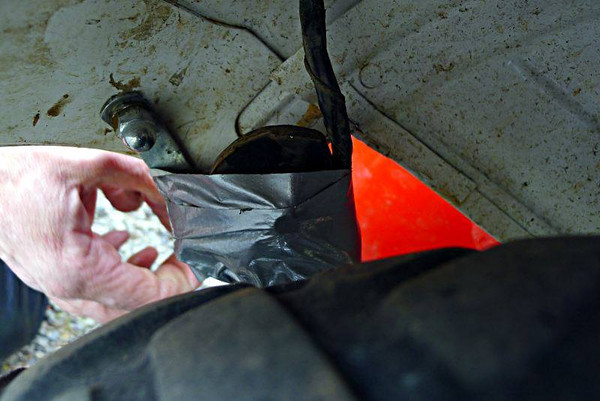 Amy picked some flowers while I worked on the bike

It wasn't far to pavement. We took Snowden Road down through White Salmon, crossed the bridge into Hood River and headed back to the fairgrounds and the finish.

The final check point included a ring toss for points

a slow race and dart throw

Andy flew his sidecar through the slow race, but I was laughing too hard to get a photograph

Final checkout to deposit the trash we collected along the course and retrieve our "card of value" . Tawm collects these at the start to ensure everyone comes back and checks out. The staff keeps track of who is out on the course and sends out search parties if not everyone gets back.

Final points are given for a dice roll at check out

The sweeps came in, ushering the last contestants off the course

We wrapped up with an awards ceremony with trophies and prizes.

Another Black Dog drew to a close

* I stole the best photos posted here from my brother Andy and my wife Amy. Thanx guys! I had a great time spending the weekend with you!