Just thought i would wish a merry christmas to all the Aussies and all the best for the new year ,keep the wind in your face and ride safe ,cheers Tezza
M

looks like youse were having a great time
M

Still got to repair airbox and fit carbs, as well as get a gasket for water pipe connector near head, which is leaking. But not far from firing her up for the first time!!

Forgot to loosen swing arm and it took ages to get that mongrel in! Reckon would still be doing it if someone never had the bright uidea of looking in the manual lol
Far easier with swing arm loosened But still a 3 man job.

And yes 5 ferries was a great ride mate
M

This was posted on Rats-s Cafe forum for people to post other places , that the culprits get caught!

Very "In your face" colour scheme.
Distinctive muffler. It's a "REMUS" sports pipe modified to fit the bike. No one else will have that pipe on a Triumph unless they did a refit too.
Bike is exactly as shown in photos (or it was when it left here). They were taken less than a month ago.

During the cover of darkness and while we were having a wet and windy night some scummy turd decided to sneak in and steal my bike outta the carport.
Also took 2 of the kids dirt bikes, pushed all 3 out the driveway and rolled em down the hill.
The kids bikes were both out of fuel and they couldn't get them to start so they got dumped on the side of the road.

No such luck with the RS. It had the key left in the ignition and would've started without a problem, so she is gone.
No insurance, cops arn't real interested and might get out later this evening if the local bloke can spare the time.

Have spent the last 6 hours making up posters and dropping them all around the local town and Wodonga which is 20 K away hoping that someone will spot it. Really trying to make it too hard to move and hoping they abandon it somewhere.
More concerned that it could become a liability to them and they dump it in the river or burn it. I'm ****ed if they do
M

Hi all.
Had a phone call from a fella today who said he knew where my bike was. The info had been passed onto the local police.

I called them to confirm they had recieved the info and it wasn't a hoax and was told they were just going out to investigate.

At the time of writing this I haven't actually heard back from the station, but I have taken a drive into town and stuck my head over the back of the station fence and recognised my bike in amoungst a heap of other stuff it the darkened shed.

Is showing signs of having had a fall. Not sure if just dropped while being moved or at speed, but there is obvious damge to the front fairing area.
The truth will come tomorrow when I go into the station to look for myself but the main thing for now is it's been recovered.

Thanks to all for forwarding this on and telling others about it. Could you finish the rounds off with the good news too.

I have now set up an Events Calender here

Heaps of Sydney & NSW rides plus a few interstate. With more being
added regularly. Well worth a look if in Oz. 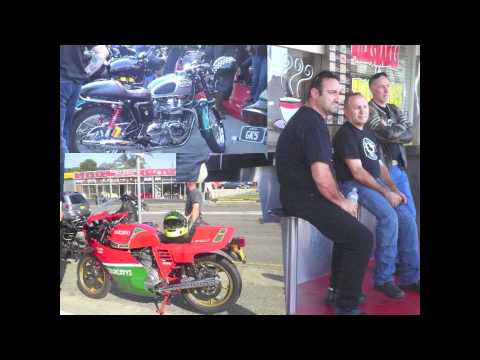 Please send a message to all your contacts to come along on March 11 for the ride in the morning from either Pie In The Sky at Cowan (north),
MacDonalds at Kirrawee (south) or Glenbrook (west).

I will organise the starting point at Cowan and Milan and Stephan
will look after the Kirrawee start point. We need someone to be at
Glenbrook on the day to take registrations and lead the ride to
the Kids hospital - let me know if you can assist.

Riders will leave each location at 9:30 am and ride to The Children's Hospital at Westmead.
This means that riders will be able to leave the hospital at 12:00 noon after the prize draw.

Yes, we will organise for a prize draw for riders again this year
but we need your assistance.
If you have any contacts who would like to promote their motorcycle apparel, just let us know and we will work with you to get some of their products as part of the prize draw.

Tribute ride has been organised for Cobba & Speed3 for July 8

All money raised to go to there family's

Details can be found Here http://www.ratscafe.org/calendar.html